Performing the same exercise again, this time with a G major chord and the G major scale:

Reading from left to right of the chord diagram, the notes we are playing are G, B, D, G, B, G.  In this arrangement, there are 3 Gs, 2 Bs and only one D.  There is a lot of G in this chord, and not much D.  Regardless, lets compare the notes played against the G major scale, which I have lifted from chord theory 3: 12 major scales, and condensed to get rid of the notes from the chromatic scale that are not found in the G major scale.

Once again, we can see that this chord – G major – is made from the root, third and fifth notes of the G major scale.  As an exercise, you test other G major fingerings against the same table of notes, and you will find the same result.  If you are still unsure that we can derive a rule from 2 examples, simply go through the same exercise for all of the 12 major chords.

Applying the pattern of 1 – 3 – 5 to a chart of major scales gives us the following definitions for the major chords for all 12 notes.  Why?  Just because we can, and it may come in useful later.  There is a plain version at the bottom of the page, in case you want one.

By using the chart above, and the following diagram, you can start to work out new shapes for your tired old major chords.  Want a G major with a bit more D in it?  Now you can work it out.

Earlier articles chord theory 1, 2 & 3 laid down the foundations for this piece on the C major chord.  If you don’t have a clear understanding of tones, semi-tones, intervals or major scales, these articles should set you straight.

Now, we could just use a search engine and find out what notes make a major chord, and apply that theory to form a C chord, but its more fun to work out the notes from knowledge we already have, as guitarists, and then try to derive the rule for ourselves. 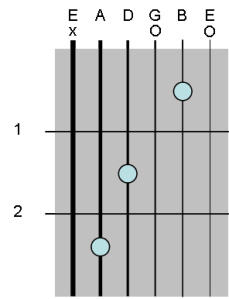 To really break this down, and apply our learning from the earlier articles, let’s do this in stages.  You can refer to the chromatic scale below, to help work this out.

…condense the diagram to get rid of the notes we don’t have in the scale, add some numbers…

…mark out the notes we identified above…

By working through these stages, I can see that our C Major chord comprises of the first, third and fifth note of the C Major scale. Let’s see if another version of the C major chord tells us the same story.

Examining this chord diagram, we have C, G, C, E, G from left to right.  Hmmm, the notes are the same, but in a different order.  Is the order important?  Well, at this level of learning, the answer is no, but note order does become important later, when we start to learn about chord voicings and chord inversions, but put that from your mind for now. Just remember that the lowest note is the root note, and is C for this chord.  If you had massive hands, you could add another C note in there on the unused string.

Wow, I wonder if other major chords work the same for their major scales?  Let’s find out in the next article, about the G Major chord.  In the meantime, here is a diagram of all the Cs, Es and Gs on a fret board.   You can use it work out different fingerings for this major chord, see if you can spot the open C, the third fret barre and the tenth fret barre fingerings for this chord.

In this article we learned

All fret and chord diagrams have been produced by me.  Feel free to help yourself.  The stave at the top of the article was shamelessly taken from an image search.

Things I have written about

I live in North Cornwall in the UK. I teach and practise martial arts and music, and I write software for a living. I live with my lovely partner Adele, our dog Willow and three productive hens; Imelda, Betrude and Izzy