the following piece was written by one of my teachers, Master Niall Grange, and first published on Niall’s Facebook page. many thanks to Niall for permission to republish here. if i can track down part 1, I will repost it here too.

I wrote and published an essay more than a decade ago on what it was like to practice Taekwondo as a middle-aged person. Well 12 years on I’m now 63 and still at it…….I’m also still doing Taekwondo. (after a fashion)

I suppose the first thing I really should say is Taekwondo would not be the natural choice of someone in their late middle age to take up, particularly if they were to watch a demonstration by the Korean Tigers on YouTube. All that would do is to make them wish they were 40 years younger and would probably make the onset of arthritis seem worse than it really is and feeling quite depressed as they struggle to put on their slippers, and slump into their armchair with a large malt and think about what might have been.

When I wrote the first essay I was still competing and was a successful international technical judge. I could rely on most of my bits to operate pretty well, I could (much to the annoyance of my wife) bounce out of bed in the morning and run up to 10 miles before breakfast, and on other occasions bounce back into it… Now, the aging process doesn’t happen all of a sudden; it creeps up on you when you’re not looking, chipping away almost so you don’t notice, but eventually forcing you to accept that; the older you get the better you once were. Aging is like a mosquito bite, you only notice and hear it after it’s had its suck and left you feeling sore and itchy!

So what do you 30 or 40 something’s have to look forward to! Well, for a start you slow down, your reactions are slower and your ability to perform repeated turning kicks up and down the hall diminishes. (I must point out that this is not a problem for me, I could never do that anyway) Your side kicks and turning kicks hurt your supporting hip, in my case caused by the onset of arthritis. You get tired faster and your ability to remember old, or learn new techniques takes a little longer and, when injured it takes considerably longer to recover. You do however, develop a much greater understanding of Sir Isaac Newton’s law of gravity and that comes without the aid of a science degree, but by simply looking in the mirror and, if you are feeling really brave do it while naked……On second thoughts, probably not a great idea. Terrify the cat!

So why should any senior individual want to even consider taking up an activity like Martial Arts. Well, leaving aside the fact that anyone in late middle age is never likely to become an Olympic star ,or World champion the Martial Arts.has so much to offer the older student, such as helping to retain or maintain a sense balance, keeping supple, slowing down the possible onset of osteoporosis and other aging diseases, developing a new and mixed likeminded group of friends of all ages, which is important for mind stimulation.

It is very easy for the older person to lose self confidence, develop depression, as they approach or pass their retirement, the loss of a life partner, or just by the realisation of losing those feelings they once had, when they thought they could do anything and would live forever, and now, feeling the best of their life has gone. I believe Martial arts can help to redress this loss by learning new life skills, such as self-defence, or even Kup grade patterns/kata that can be practiced on their own. Martial arts, I promise, can help, and more importantly, by taking up any martial art the best could be yet to come.

The older person can take gradings which demonstrate their budding skills. it offers the same sense of achievement as it does for a younger person, in fact, I would say it has greater meaning than for the younger and fitter individual.
There is still the possibility of entering (Kata/Patterns) competitions even at international level, regardless of age and all this with very little possibility of being injured, but none the less, with a great adrenalin rush.

Beware however, this adrenalin rush could possibly reinvigorate those long forgotten unused bits! It will certainly make you feel less invisible, a common ailment amongst us older generation.
Generally, the older student has a better sense of humour, certainly the ability to laugh at themselves. And, have little left to prove (except to themselves) as ego rarely gets in the way.

So, get out there and have a go! The truth is, it doesn’t matter what Martial Art you do, just have a go at something. Find what suits you, get on the road and experience the journey. You’re never too old to enjoy the smell of roses.
The martial arts really is a wonderful activity for the older person and, with the right instructor that has a sympathetic understanding of the needs of the older student (without patronising them) it can be a positive life changing experience, as the benefits of learning a Martial Art are immeasurable.

If the (UK) government figures are correct, there will be far more of us ‘grey generation’ in years to come. Perhaps now it’s time to start changing the way we attract and teach our martial activities.

After the awards and medals of youth, comes the badges of grey hair and creaking joints and an awful lot of experience, so don’t write the oldies off, embrace them.
As for me; it has been a question of adjustment and adaptation to getting older. Recognising my limitations, without letting them get (too much) in the way, which is countered by the fact I’m still able to learn. Understanding that when something becomes too difficult or painful to do you change or adapt it, and in that way you are making it your own.

In the meantime, I have 2 banjacksed knees and a very doggy hip, so I no longer run 10 or any other number of miles in the morning, or any other time of day for that matter, and when I’m demonstrating a tumble or break fall I usually ask for assistance to stand up afterwards. I’m far more ‘genteel’ in the way I get out of (and into) bed, but I still train and teach and my enthusiasm is as good as a man half my age. I enjoy good malt, with just a little ice and definitely no mixer or guilt. So cheers!

I do have to remind myself that, as an older person I really do have a wealth of experience; the only problem being however, I’m getting a bit old to do a lot with it. A definite case of youth being wasted on the young. Ah, what can I tell ya!

ORIGINALLY inspired by a wonderful week spent training with Master Mark Worsfold at Loch Rannoch, Martial Arts Summer Camp 2013 marks the fourth annual consecutive camp.   our first camp, back in 2010 was at a site within walking distance from Corfe Castle.   back in the day, we based the training program on Mark’s successful routine of morning taiji followed by taekwondo, then non-martial pastimes.  twelve students from Surrey and Halwill Junction, Devon, attended.  2011 saw camp relocate to Upper Lynstone, Bude, where it has been ever since.  student attendance has grown steadily each year, as the good word spreads around the club network.  2013 peeked at nearly forty attendees.   what makes camp so successful?  dedicated, hungry students.   an attitude of openness – all styles are welcome, all levels are welcome, and total beginners are greatly encouraged.  generous and talented instructors.

THE MAINSTAY of our instructor base is undoubtedly Masters Niall and Liam Grange, a father-son team with 60 years of martial experience between them.   unpaid but definitely not unloved, Niall and Liam bring taekwondo, hapkido, taiji, kungfu, silat and more, and give freely to those who seek.  adding further to the instructor mix, Masters Mark Worsfold, Matthew Hobbs, Bob Rowley, John Rodgers, Tony Butcher, Con Halpin and Jitsu-Jamie have all contributed further: taekwondo, bokken, jo-staff, aikido, jujitsu, pressure point fighting, patterns.

IT TAKES a special kind of student, and teacher, to stand in a field, in all kinds of weather – training hard, barefooted, without rank, in plain clothes and plain view.   those students and their teachers are kin, family.   practitioners rarely realise, but when training, you give and expect the ultimate trust from your partners, teachers and students: your lives are in each other’s hands.  this generosity of spirit, trust, love and giving at camp can be a life-changing event for children and adults alike.   strong bonds are forged, and examples are set for us all to follow.   a time to inspire, and to be inspired. 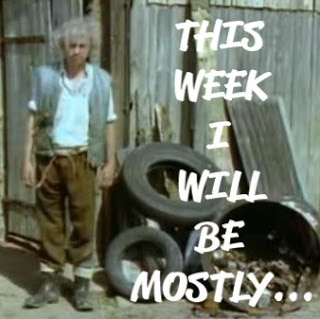 Arrival at camp for most people.  If anyone can remember today’s training, please get in touch. 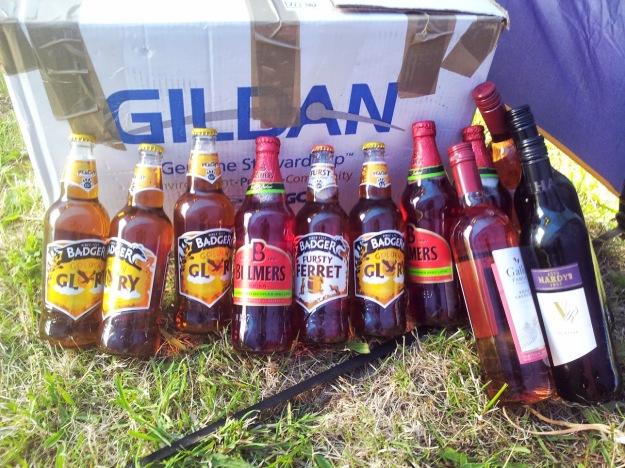 that’s the badger. when training, be sure to keep your fluids up

today, there were approximately 30 students training. great turn out.

approximately 40 students training, including campers from around the site. new camp record for attendance 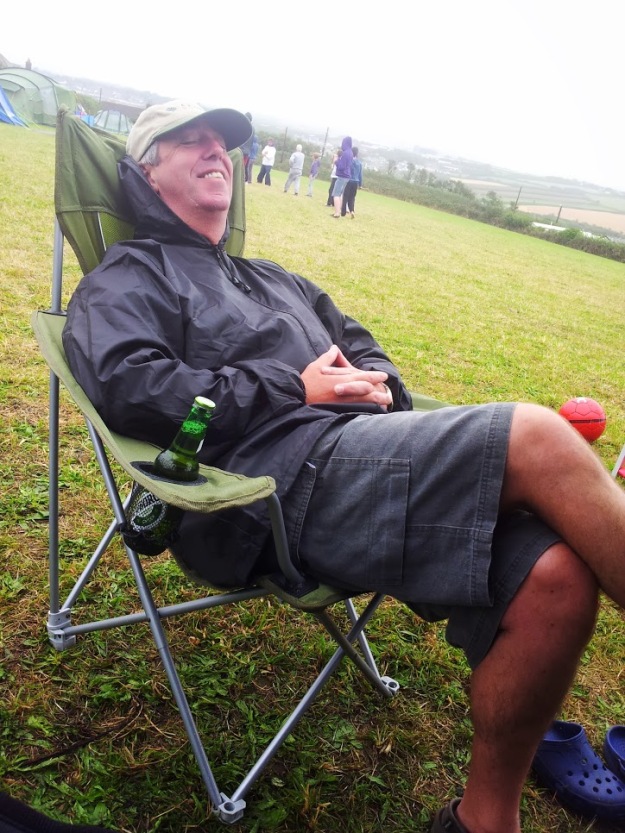 “whatever you do, put some bloody sun cream on”

special guests from Tintagel today – hooray! Sadly, Norman and Wendy’s instruction commitments meant we didn’t see as much of them and their team as we would have liked, and every participant really enjoyed the stick work

particularly inspiring training routintes from Con today. more about these in a seperate article 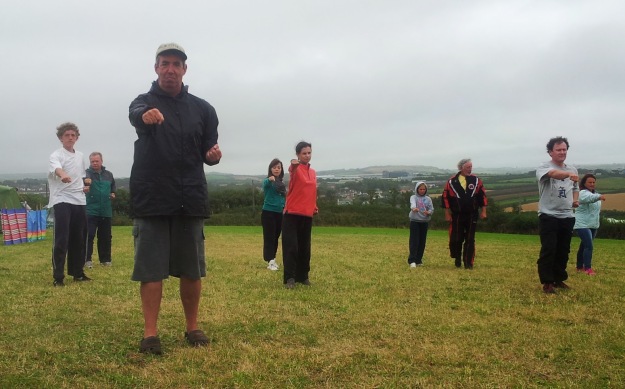 end of camp, always emotional. The last remaining students put in some effort, but eventually tiredness, rain and departure take their toll 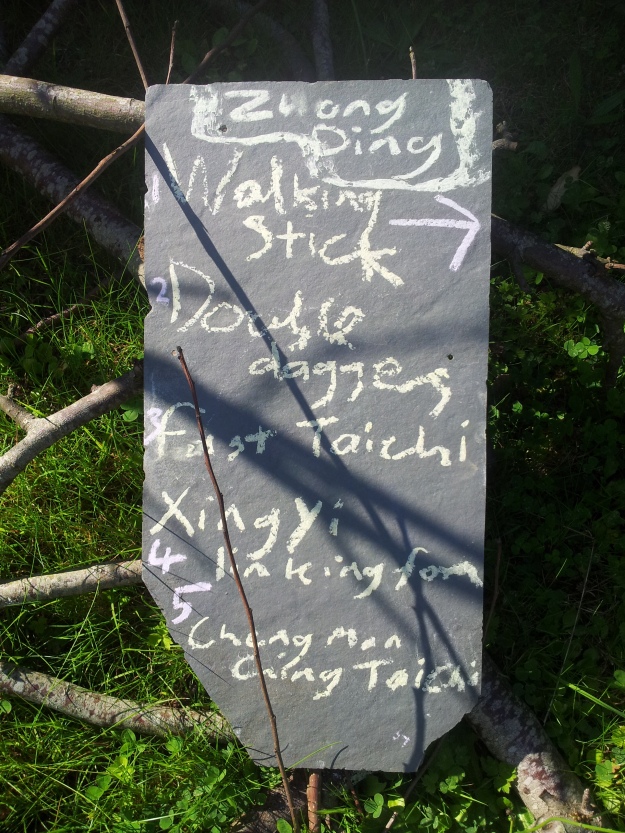 Aside from this great variety of group training, there was plenty of individual support outside of larger sessions, including guitar lessons, one step sparring, poomsae, the walking stick form, mantis form, Cheng Man Ching goodness, and an intensive tutorial by Liam for Joe ‘Baby Blackbelt’, Richard ‘Handstand’ and Young Man Kelly on the double dagger form.   these excellent young men soaked it up like sponges

some of the usual suspects 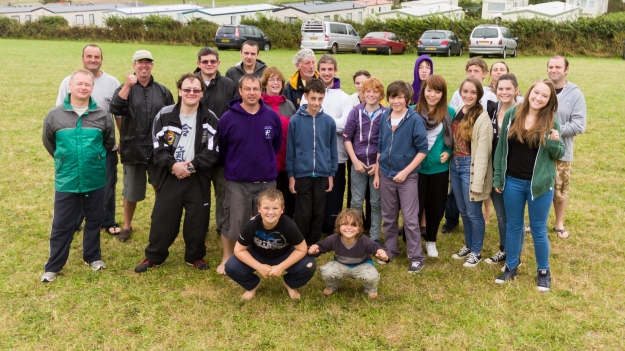 which one is Keyser Soze?

CAMP ATTENDANCE this year was brilliant.  students and teachers traveled from as far as Middlesbrough (Hey Bert!), Eastbourne and within the M25 to be with us.   some students were absolute beginners, some just two months in to their training, some were total strangers staying onsite.   all students worked hard, battling the elements, self-consciousness, and their own fears of failure.   there was no failure.   every year we see progression in the students, both between and during camps, and that is one of hidden joys of regular attendance.   a day after camp ended, numerous students progressed up the ranks, but particular mention goes to new poom grade (junior black belt) students Ellis, Alice and Tia, dan grade students Hannah and Tom.

WE ARE ALL of us students.   those of us who instruct, assist or partner up with someone for training can pick up instructional skills, techniques and training routines, to help us develop ourselves and our students

to everyone that attended and contributed in any way, pastoral care, cooking, photography, washing up, de-trashing the site, including, nurturing, welcoming, giving, hugging, kissing, fighting, dancing, loving – may Ra and Selene warm your souls forever 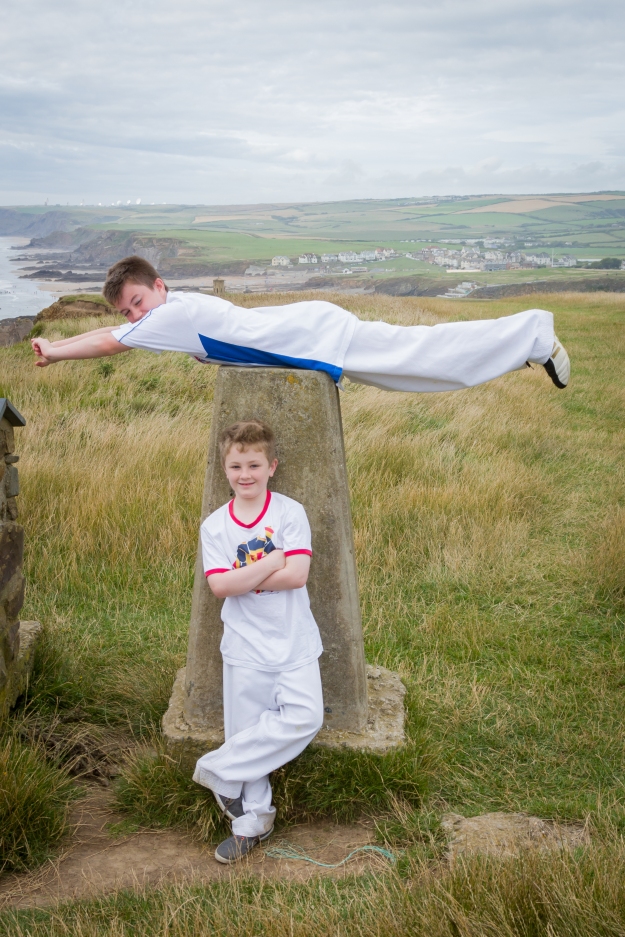 Things I have written about

I live in North Cornwall in the UK. I teach and practise martial arts and music, and I write software for a living. I live with my lovely partner Adele, our dog Willow and three productive hens; Imelda, Betrude and Izzy